During the last year (2019) the new owners of the School Hill retail site have made plans to redevelop the area. The shopping precinct was first erected in the 1970s. The following article was prepared for a talk at Histon Library some ten years ago from censuses, church registers, VCH Vol IX, 1806 Enclosure documents and information within the H&IVS archive.

The School Hill site together with The Gables opposite was once part of the Histon Manor estate. Around 1825, Henry Ainger of Coton, on marrying a local girl called Mary Howlett, bought Middle Farm from the Sumpters of Histon Manor. The newly-weds took up residence at The Gables on the High Street where they raised their four surviving daughters. He is described as a gentleman and landed proprietor. Middle Farm had approaching 200 acres at enclosure and together with the ninety two acres in Histon awarded to the Ainger family at the same time, he had considerable local holdings.

Henry died in 1860 shortly followed by his wife. Only his daughter, Marianne, married. The three remaining Misses Aingers lived on at The Gables until their deaths when the School Hill site was put up for sale.

The parade was constructed by Sindalls in the early 1970s on land once occupied by three pairs of cottages and a substantial house with a Georgian extension. Such a development, in what was regarded as a residential area, was unpopular and on appealing to the Ministry of Housing over one issue, the Parish Council were told in no uncertain terms that ‘…they had no redress against the deviation from the developers plan relating to School Hill‘.

In 1973 grave concerns were again expressed by the Parish Council… 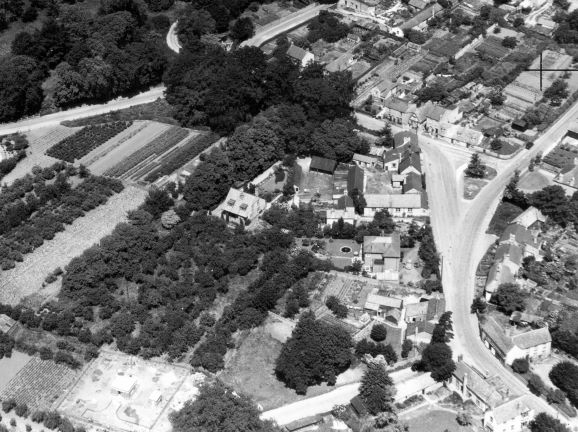 c. 1950 School Hill showing the Gables, the haberdashery opposite and its Georgian extension and the 19thC cottages erected on Dove Close.

The present utilitarian buildings replaced the run-down cottages and a fine old house of a type much sought after today. We know a little of their history. In 1806 the house and garden, later called Wildcroft, together with The Gables across the road, was part of Middle Farm (middle of the village), which was owned by Thomas Sumpter of Histon Manor. The Enclosure map shows the L shaped property on a two acre plot with a large outbuilding. The original substantial wing was a timber framed, two storey tenement that appeared to have been encased in brick at the same time the Georgian wing was

added. The position of the chimney to one side of the ridge suggests that this may have been a medieval hall house originally erected without a chimney stack. Today, many remember the property as being Richman’s, later Veal‘s haberdashery. Frank Richman opened his draper’s shop around 1905 as recorded by an Edwardian photograph taken by Alice Paige.

Between 1891 and 1894 the house was the home of the Revd Thomas Philpot, Baptist Minister for the Chapel, then on The Green. This delightful gentleman kept a diary. He obviously adored his wife and young family and of Wildcroft he wrote….

‘Oh how I wish everyone could live in such a paradise as Wildcroft….’

He loved the large garden. After a busy week, he found his usual Saturday sermon writing stressful. A change of schedule was called for.

‘… Was able to give a larger part of the day to gardening owing to the early preparation for Sunday. Since I have avoided the great Saturday strain my health has greatly improved….’

Later in the season his love of gardening presented a dilemma.

‘Up to this time all spare moments have been necessarily given up to fruit gathering. Begin to think that a large garden is too great a responsibility for a minister. Delightful as is the work yet that is not his work after all.’

October 1891 was a windy month. Whilst travelling to Waterbeach in the family trap, a ‘high and mighty gale’ blew up, tearing off a large branch of a tree. Fortunately, their horse saw it coming and sprang towards the road side hedge. The gales continued and early next morning…

end to that in which we were laying; else – well – enough fell to kill all of us who were sleeping there.’

By the time the Revd Thomas Philpot lived at Wildcroft part of the original two acre site had already been built upon. Around 1840, the outbuilding was encased in brick and converted to labourers’ cottages and four further brick cottages erected. Old deeds describe this area as Dove’s Close and it is believed the outbuilding started life as a large, thatched dovecot.

Once the railway was opened in 1847, Station and Cambridge Roads became the focus for village expansion. In 1806 there was nothing but open fields and the windmill. In 1877 a bill of sale advertised land for housing develop

ment. By 1886 there was the ‘Railway Vue’, fifty eight new homes and, of course, the massive jam works. Visitors from all over the world saw the area with its orchards, pasture, strawberry fields and young plantations, as a wonderful and healthy location for such an industry. To read more on Impington follow the links